A few days after my admission to hospital, it began to sink in that my baby might be born any day. Or in a few weeks. Maybe a month. The prognosis was uncertain, consultants were vague but there was only one purpose of the two painful steroid injections I had received. My baby was being given the best possible chance to survive outside of my womb.

In my typical fashion of wanting to prepare as much as possible for every scenario, I googled ’30 week baby’ hoping to see a glimpse of what my baby could look like. I was scared. Would my baby be covered in hair? Would he be translucent? Focusing on his appearance was a distraction from dwelling on his precarious situation.

The Google results were fairly mixed. Lots of Bounty-type websites came up, telling me what exciting stage of my pregnancy I should be experiencing. There were photos of big bumps and smiling ladies next to 30-week milestone cards. And dotted throughout were photos of real-life preemies. The results were so variable. Some babies were in plastic bags, most had wires and some were wrapped up in little blankets. When I clicked through the results, it seemed that most babies were a few weeks earlier or later than my baby. I just wanted one page were I could see a real life story and outcomes.

So here is what my 30 week baby looked like. L was born at 30+6, weighing 2lbs 10oz. He was born via emergency c-section due to absent end diastolic flow and IUGR (I was in hospital for 5 days before hand). 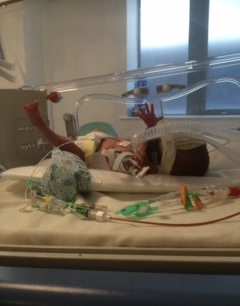 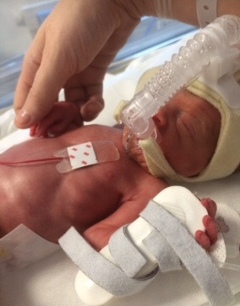 He was placed in a plastic bag (which I never saw) and taken straight to NICU. He was on CPAP (a type of breathing support machine) from birth until he was a few days old. Apart from being tiny, he was fine. Perfectly formed. I still can’t quite believe it.

L’s eyes were not fused shut. He did not have hair on his tiny body and he was not translucent. He was nothing like I had imagined even after my Google search. He was jaundiced, which made him look very very red rather than yellow.

He could cry, urinate and poo like a normal baby. I have no idea if he followed the same ‘first poo’ cycle as a term baby as I didn’t see him for around 6 hours after his birth. Mainly because I was bedbound after my surgery. He did not feed for a few days and received total parental nutrition via a long-line in his foot.

On his first day of life, I couldn’t hold him but I helped changed his nappy. I stroked him through the incubator and he held my finger. When I eventually held him on day 3, his head easily fitted in the palm of my hand. I held him down my top (kangaroo care) – with his head on my chest, his body stopped before my belly button.

My 30 weeker was in hospital for over 40 days. At 8 months old, he has no known ongoing health issues. He is still small but he is perfectly healthy.

I hope someone afraid of their 30 weeker finds this post. And mums of fellow 30 weekers, please do add your experiences in the comments.